Dan and Guy from Adaptavist

We arrived early on Wednesday in Antwerp, and rushed to the conference. Interestingly, the event was held in a cinema complex, where the presentations were given in the cinemas themselves. This worked really well: everyone had a comfortable cinema chair with drink holder, and the presenters had a huge screen and space out the front for delivering their presentation. 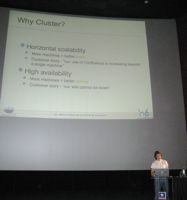 A large area downstairs was where the exhibition stalls were set up. We found the small Atlassian booth, already set up by Ivo and Joachim from Pix Software who were promoting Confluence, JIRA and their SCM, AccuRev.

Mike spent a while fine-tuning his presentation, while I surveyed the area. The provided pastries, snacks and drinks were looking good! I met a couple of the Adaptavist guys, Dan Hardiker and Guy Fraser who were along for the conference.

Mike got a good turnout to his presentation on pragmagtic clustering. Up on the cinema screens they put him up as a big head on the left, with his presentation slides on the right. He didn't get many questions at the end. In hindsight I probably should have asked him some tricky ones.

Scott and Dave arrived a few hours after we did. By all accounts, it was quite a trip. Slow connections meant they just missed their booked flight from London Gatwick to Brussels. They rushed back on a train to the city to get on the next direct flight to Antwerp.

The rest of the day was a flurry of going to a few talks (Bill Venners on handling failures was interesting; the filthy rich Swing clients a bit too technical) and talking to customers while Scott and Mike gave demos of Bamboo. There was a lot of interest in Bamboo. People were impressed by the statistics coming out of it, and how easy it was to use. I was surprised how long people could stay looking at the software; I'd walk away for an hour to go to a talk, and come back to find Mike still talking to the same people about Bamboo.

After the conference finished, we headed around the corner to the Hollywood café for the Antwerp Atlassian User Group. It was a very relaxed gathering — we just ordered dinner and a few beers and sat around talking. The night ended pretty early, as we were all still a bit jetlagged and had made an early start from London that morning.

On Thursday (day two), I found a couple of very interesting sessions. First was the Spring OSGi presentation, which I'll describe in more detail shortly. The second was Rod Johnson with a Spring update, covering both the high-level focus of Spring2 and the plans for Spring in 2007.

Dave and I also started giving demos to people passing by. There were a couple of guys interested in Confluence, and a lot of people who used JIRA and Confluence who wanted to check out Bamboo. After watching me for a while, the feedback from Scott was to ask people what they were interested in, before jumping into the demo. Obviously I was throwing out information a bit too enthusiastically!

For dinner on Thursday evening we went in search of a nice Belgian restaurant. A recommendation from a friend led us to a traditional restaurant in the old town. The dinner was nice, although I can't remember now what I had.

← Europe trip: the flight and London
Spring presentations at JavaPolis →