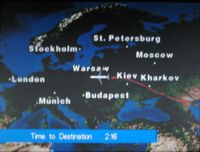 What has turned out to be a great trip didn't start so well. An electrical storm on Monday afternoon in Sydney delayed our exit. My flight, scheduled to depart an hour before the others', was delayed by 2 hours; theirs by 3 hours. The air conditioning in our little 747 was broken too, so it was a hot couple of hours. A slow start to what was already going to be a long day. My original flight plan: British Airways from Sydney to Bangkok, Finn Air from Bangkok to Helsinki, then Finn Air from Helsinki to London.

Landing in Bangkok didn't really improve things. The plane sat on the tarmac for a couple of hours while we waited for the ground staff to arrive. Eventually we got the steps up to the plane, but noone came up to open the plane door. Apparently that's a separate agency. Then the buses arrived to take the passengers back to the terminal, but there were no drivers. Apparently that's a separate agency too. In the end, a four-hour delay getting into Bangkok meant my connecting flight had already left. 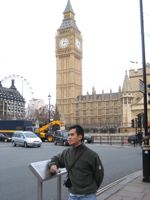 Luckily, what seemed like a huge disaster actually turned out well. The British Airways staff grabbed me as soon as I got off the plane, and told me I was already booked on the next flight to London: a direct flight with Qantas, QF1. Even better, I was handed a business class boarding pass. Nice! Thanks to the very helpful BA staff in Bangkok airport, I was on a direct plane to London, due to arrive before what was originally planned!

It felt a bit like the Amazing Race. Through the vagaries of the international air network, I'd managed to come out both ahead of my original plan, and ahead of Mike, Scott and Dave. They landed about an hour after I did, and we caught each other in Heathrow airport.

Scott took us to an Indian restaurant in Brick Lane for lunch, and then Dave and I headed out while Scott prepared his presentation for the London user group. Dave was keen to see a bit of London, so we took a whirlwind tour of Westminster. Just over an hour later, we were back to meet up with Scott and Mike to head to the London Atlassian user group.

After hearing a lot of great feedback from customers and partners at the London AUG, there was dinner, drinks, a few hours' sleep, then we jumped on the next plane to Antwerp early Wednesday morning.