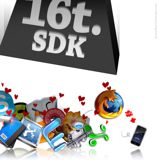 This article has a good summary of the problems with the Apple’s current iPhone SDK and App Store. It also lists many of the useful applications that won’t run on the iPhone until there’s a black market for iPhone apps, meaning a way to install applications other than from the App Store:

There are no less than five apps to turn my iPhone into a flashlight, yet I can’t turn it into a 3G-powered Wi-Fi hotspot. Why? Because the SDK has more restrictions than Guantanamo–devs can’t integrate with the OS and have to steer way, way clear of copyright and trademark issues–so the most innovative, game-changing apps might not ever make it to your squeaky clean iPhone.

– Why We Still Need the iPhone App Black Market, Gizmodo

I tend to agree. Many of these things sound really useful, and a free market for applications leaves the user in control of what they decide is suitable to install, not Apple.

However, even with a limited amount of functionality in the current SDK, it still seems like applications have the ability to abuse your personal information. A game I installed, Aurora Feint, has been removed from the app store because it transmits all the details of your contacts back to their server without asking you.

The authors of the game have apologised and it seems to have been a naïve mistake. But given this example, I can only imagine what a malicious developer could do.

Note that this problem of applications’ use of private data is not worsened in any way by having a black market for iPhone applications. At the moment, the situation is arguably worse because the iPhone applications appear to have the golden seal of Apple, and many users won’t look to see who the author is before installing them.