After getting your confirmation, the iPhone 3G helpfully tags all photos it takes with longitude and latitude. Your photos will then store EXIF information about where they were taken. This is commonly called ‘geotagging’.

Flickr has had location functionality for a while, where you can position your photos on a map of the world. Unfortunately, it uses Yahoo’s maps which are far less thorough than Google’s. But hey, it works. Here’s my map: 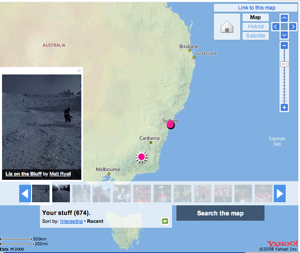 Of course, you would assume that if you upload photos to Flickr that include this standard latitude and longitude information in the photos, it would automatically put the photos in the right place on the map for you.

You need to enable a magical geotagging switch in your preferences that will read the information inside your photos and use it so you don’t have to manually position each of your photos on the map.

Of course, you would then assume that if you had already uploaded a few dozen photos to Flickr with the standard geotag data and then you turned on this flag, Flickr would look at the metadata on your existing photos and place them appropriately.

In order to avoid manually copy and pasting latitude and longitude of some twenty photos, I had to turn to a third-party application, GeoReTagr, which promised to scan the information inside Flickr and update the location information appropriately.

Unfortunately, the author of this tool assumed that everyone is in the north-western quadrant of the world, so I was still stuck inverting my longitude and latitude values because they are in fact south and east values, rather than north and west.

Not quite the painless geotagging process I imagined when I started.

← Back from Thredbo
Raphaël: the JavaScript vector graphics library →