Although it’s barely been visible in the last couple of days, I noticed a tiny crescent moon peeking through the clouds on Sunday night in Sydney. Astronomy Picture of the Day has this great shot of both Venus and lunar crescents: 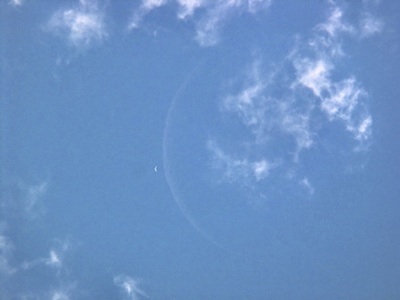 I’ve heard a misunderstanding of the crescent moon that the roundedness is caused by the shadow of the earth. This isn’t actually the case – half the moon is always in shadow and the rounded shape we see is the result of the shadow being projected across the moon’s spherical surface and viewed on an angle from the earth. Wikipedia’s article on the phases of the moon has several explanatory diagrams.