Keyboard shortcuts on the Mac are a mixed bag. There's a few things I've found neat, but others have me shaking my head. Strange for a company that focuses so heavily on user interface design, I figured they'd have everything pretty well worked out.

The menu bar is fixed at the top of the screen in Mac OS X. As such, it's a pretty crucial part of the user interface. Since it's tricky to learn lots of new keyboard shortcuts straight away, when starting with a new application I tend to use the keyboard to navigate the menus to find the option I need. Some applications also leave out keyboard shortcuts for useful commands, and menu keyboard shortcuts can give access to these options without reaching for the mouse.

Let's say I want to open the Downloads window in Firefox, whose exact keyboard shortcut I can never recall. What I do know is that it is on the Tools menu somewhere.

In Windows, I hit Alt-T, and the Tools menu pops open. I see the Downloads option has an underlined D, so I hit D to open the downloads window. Simple and fast.

Unfortunately in Mac OS X, unlike Windows, there's no simple shortcut I can find to go directly to a given menu with the keyboard. Instead, to get to the Tools menu in Firefox above, you need to hit Ctrl-F2 to go to the menu, T to go to the Tools menu, then hit return to pop open the menu. Even when the menu is opened with the keyboard there's no indication of which button I should hit to trigger the Downloads option, assuming I don't use the assigned keyboard shortcut. Remember that assigned keyboard shortcuts don't exist for all the options, so this might be the only way of accessing a particular piece of functionality on the menu.

Ok, let's try hitting the first letter like in Windows. 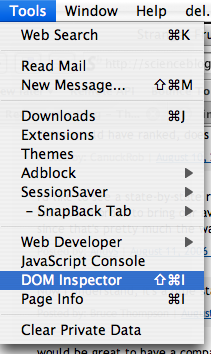 Why does hitting D jump here?

Typing D goes to the lower option starting with D: DOM Inspector. Why? I honestly don't know. Hitting D multiple times doesn't jump through the items, instead you have to type enough letters to identify the option uniquely.

In summary, on the Mac to get to the Downloads option, I need to type Ctrl-F2, T, Return, D, o, w, Return. And finally it opens. A lot more difficult and time-consuming than the three keystrokes required in Windows. I'm not sure my grandmother could even type Ctrl-F2 without putting her glasses on and using two hands.

There is a minor benefit, however. In Windows, the Alt key is always tied up as the menu activation key. Users or applications defining custom shortcuts with the Alt key might find they clash with keyboard access to the menus. My Macbook Pro has five modifier keys: Shift, Fn, Ctrl, Option and Command. Except for Shift, none of the other four is tied to a particular operating system function like menus, so the flexibility for assigning keyboard shortcuts is greater.

In general, the keyboard shortcuts on the Mac are much more obvious than those in Windows. They are prominently displayed on the menu in all applications. Most system shortcuts are easily located in the Mac Help. Slowly Windows is moving this way. Applications like Firefox have lifted the bar in terms of keyboard navigation, and Microsoft is starting to take notice.

In it's default configuration, Mac OS X has keyboard navigation that skips some form fields like checkboxes and buttons. I can't work out the reason behind it. As soon as I found the setting to allow keyboard navigation of all controls I enabled it on both my Macs.

My final point about keyboard shortcuts in Mac OS X is positive: it's great that they're so often customisable. For example, the shortcuts for Expose, Dashboard and so on can easily be set to any function key or modifier. Even the global navigation keys for moving between windows can be changed. I have no idea how you could do that in Windows, if it's even possible.

← Enter the Mac
Origin of the ampersand →